Showing posts from November, 2011
Show all

By Janaki - November 25, 2011
It is now winter here and I would love to be warm as toast. Because of the winter we have kept a blanket on the sofa in the living room as every morning when I have to go to school I feel cold and I eat my cereal in front of TV. And that‘s not all……. When we go out to play all of us will have our hands tucked into our armpits and our caps on. That is really a nuisance. But who could blame us? We almost expected smoke to come out of our mouth. Anyway, on Wednesday we had a Biriyani party in our compound. Coming into my compound might be like coming into a world with all kinds of parties. That is why all my classmates are jealous and I am happy. When I told them about the water balloon fight we compound kids had all my classmates had sighed and said “Lucky you!”, I was on top of the world. There was a fire pit in the middle of the chairs so we all kept our hands above it, but Afra, Ayesha’s younger sister who started school some months ago ran around it and we had to chase her away.
1 comment
Read more 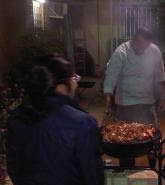 I totally regret for saying that Riyadh was boring. Because the last few weeks were full of fun, fun and fun!!! There was a Kappa –and– Kozhi party, a barbecue party , the trip to the farmhouse and the trip to the bakery (which you already know about) and goodness knows about all the other parties I have been to. First let me tell you about the bar-b-q party. The barbecuing was to start at 9:00pm, but me and my parents had to go out so when we arrived at 9:30, a few people were already crowded around the grill. Some of the ladies were sitting in the chairs and talking. Few uncles were handling the barbecue. There was a table loaded with Pepsi, 7up, salad and some chewing- gum. It was the first time I had ever seen chewing gum on these kinds of parties.   The chicken was yummy! There were also chicken pieces on stick, and some people ate 2 or 3 of them because they were really tasty.  Niharika did not touch the chicken. When we asked her she told us that she had stopped eating c
Post a Comment
Read more 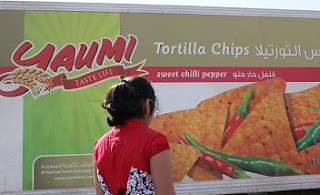 “Fine then” elders said, they were all sitting in a circle together. “Tomorrow we will all meet at 9:30 in the morning “ We did know what they were talking about.  All the people in the compound (except Talha and Ayesha) were going to visit the factory of Al Rashed Bakery .  Uncle Rajan working there and he is a big manager. I heard they make bread products and I love bread so I was looking forward to go there. I had a lovely dream that night too, that I was flying in the sky with my arms spread out. I guess that is because I always wanted to fly, just like Peter Pan. “Dress fast!”  Mom told me in the morning. I groaned. I was still too sleepy to dress. “Fine” Mom said “then stay at home” I muttered under my breath and changed because I wanted to see the factory. Soon we all were ready to go to the factory.  Nichiket and Niharika climbed into my car because uncle Sunil had to go to office. It was a merry journey. Soon we reached the factory. We had to wear hair nets to prevent ou
3 comments
Read more

“Janu! Janu! Wake up!” I opened my eyes and stared at Mom groggily. “Get up” mom urged me. “Remember we have to go to the farm.” Helped by my mother I got up and blinked until the room came into focus. I stared at my parent’s bed, Dad had already gotten up. I washed my face and sleepwalked into the living room. One hour later we were ready to go to the farm. One of uncle Loy friends worked in farm and we were looking forward, especially me, to see all the cow, goat and sheep since I love animals. Most of my compound friends were coming too along with Melvin and his elder brother Milan. To my joy Alana and Niharika climbed into our car (I hate sitting alone) and we sped off. As we went further we saw the hanging bridge of Riyadh and the beautiful view of mountains on both sides. Later when we reached the fields which spread out like a green carpet, my eyes caught a strange figure in the middle. It was a scare-crow! It had an Arabic dress and a scarf as its head.  We giggled and poin
Post a Comment
Read more 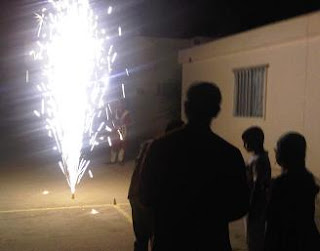 I will now continue with the happenings of Diwali party:- After playing we had gone home, Raja and Rohini came to each of our house and this is what they said “Meet at the ground in 10 minutes for the bursting of firecrackers.” But we all started to dress at the speed of a race car and reached the ground in 3 minutes! After checking everybody had arrived, Raja & Rohini’s dad announced that due to the death of Prince Sultan, noisy firecrackers wouldn’t be used. We just nodded our heads; we didn’t care about anything, but just wanted to start bursting crackers.  The firecrackers were superb. First, there was this type of cracker that sent sparks up like a fountain, then those types which we can hold in our hand. Another would spin and then fly into the air (which was totally cool) but then one of them instead of flying targeted forward and almost hit Raja who was in front. So that was the end of spinning-and-flying cracker. There was a long magic wand like cracker, the type whic
Post a Comment
Read more 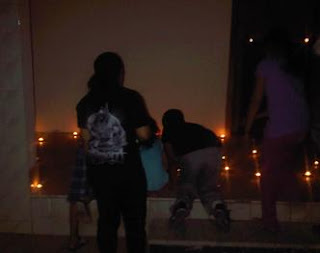 “ Click!” went the lighter as I lit a diya. “Next me!’’ squealed Talha, my friend. “Careful Talha” I warned him. “Don’t burn your fingers and you are only 8.”  “Don’t worry. Trust me, I can do it safely.” said young Talha.   “Sometimes we really can’t trust you Talha” said Nichiket. “Like remember when you promised us you wouldn’t scare Whitey the dove by going near it? But you still did it in front of our very eyes.”  “Well this time I won’t do anything like that.” promised Talha. It was Diwali and me, Talha, Ayesha, Niharika and Nichiket, my friends were lighting the diyas my dad had bought from the store. “Can I go next, Janaki?” asked Ayesha   “You are more 2 years younger than Talha so better ask my mom.” I replied. She was the youngest and mostly asked me questions and stayed with me everyday when we played because I am the only one who makes her understand and protects her from teasing boys and other things.  “I hate to be the youngest” complained Ayesha.  “Well, sometimes i
Post a Comment
Read more
More posts