Showing posts from December, 2014
Show all

The awesome party at Chandana's home

By Janaki - December 23, 2014
Last night was an awesome, awesome night. Chandana held a party at her home again, and this time out of the 16 girls of 8-D, 12 people showed up, including me. Chandana lives in a huge compound that has a clubhouse, restaurant, shop and playgrounds filled with swings and slides at every corner. It’s practically a gateway to heaven. After everyone came, we had some starters, which were chocolate chip cookies, tuna sandwiches, laddoos, chicken puffs, fish pakodas and soup, all home-made by Chandu’s mom and totally delicious. When we reached the first playground during our tour of the compound, everyone took off like miniatures of Usain Bolt for the swings. People who snagged them first swung for some time. Then someone would jump on quickly after them. I swung a couple of times, and then got off when some younger children were looking at us. I felt pretty ridiculous. But hey, who can resist swings? The tour of the compound took a little more than an hour with quic
Post a Comment
Read more 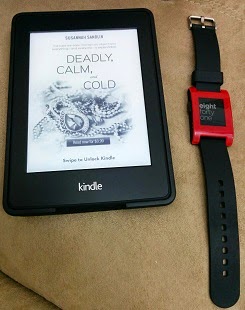 What do you get when you do the following equation? Kindle + Smart watch + Janaki = ? I think the answer is pretty obvious, though. Kindle + Smart watch + Janaki =  :-)  :-) I had been waiting a long time since we ordered these 2 from the Amazon  (well, not that long, but time feels slow sometimes). Dad explained the full process of how it gets shipped to me and it seems like a lot of work.  My new Pebble Smart watch is pretty sleek and cool. It allows me to download apps and watchfaces on it through Mom’s phone. My Kindle Paperwhite , on the other hand is very useful for reading books. It gives you the actual feeling of reading a book and has a lot more advantages.  For example, it is eco-friendly, thin and small so that we can easily slip it into a handbag or backpack and also helps to look up the definition of difficult words. I borrowed the second book of the “Hunger Games” trilogy from the library. It’s called “ Catching Fire ”, the first few parts
Post a Comment
Location: Riyadh Saudi Arabia
Read more
More posts