Showing posts from August, 2011
Show all

Movie and lunch at Lokah restaurant

By Janaki - August 28, 2011
“Janu, we will come and pick you up on Sunday morning’’. I kept my ears glued to the receiver. Few days after me and mom reached India, Kunjunni and Kunjichechi invited me to spend the day with them. So after they called me, I was dancing around the room. I would only go, so I knew I was going to enjoy a lot. This was our plan: Valyachan and Kunjunni would pick me up. Valyamma and Kunjichechi would not come. (I will tell you why later.) Then we would go over to Madhavan’s, a cousin of Kunjunnni and Kunjichechi’s and take him too and resume our way to Gold Souk mall and watch a movie. Kunji chechi and Valyamma were in the mall to buy tickets for movie “ Rise of the planet of the apes ”. I didn’t like the movie, so Kunjichechi let me to put my head on her lap. I just closed my eyes because I was a bit scared. The ending part was much better for me. After the movie, Malu chechi called to say she had come to the mall. When we all looked down from the second floor we saw her. We then sta
1 comment
Read more

Back from God's own country 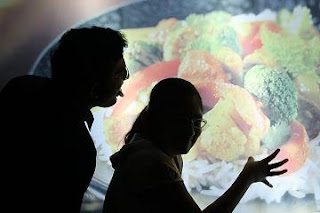 Hi! Did you miss me? I came back today and I kind of feel strange. Maybe it is because of spending a few weeks in another country. Dad and I are all cheerful, my pet fishes are swimming in their bowl looking the same and Mom is chatting away happily with uncle Sujesh. When we told Kunji chechi and Kunjunni that we were leaving soon, they were really shocked. So we hung out with them one more last day. Last night Ravi Kochachan arranged a family get together at  Golden Fork . We really enjoyed a lot. Today I am really tired. Many things have happened in the God’s own country. I will write them in the coming days.
1 comment
Read more

By Janaki - August 02, 2011
Great news! I am going to India today! Yippee!! I won’t be able to write for some days but I bet I will have tons to tell you when I return. I can hardly wait to step inside the plane and zoom off. We will reach India tomorrow morning. Dad will stay here in Saudi. I will miss him for a few days. But on the bright side he will be able to look after my pet fish. When we come back Dad will have the Hajj holidays so we might be able to go to some other place in Riyadh. Today while I was feeding the fish I had a few words to say to them. I said “Hey, I am going to India for a few days. That means Dad has to feed you. If he doesn’t or neglects to clean the bowl, don’t blame me.”
1 comment
Read more
More posts