Showing posts from 2019
Show all

By Janaki - October 12, 2019
“Pass it through the window.” Lina’s outstretched hand was trying to grab the pencil pouch bag Akshara was extending to her. Our classroom was visible through the window on the wall perpendicular to the balcony we were standing upon. If you reached out, you could just barely high-five someone in class. But right now, we were on a different mission. Lina grabbed the pouch, but it was only when its contents fell out that that we realized it hadn’t been zipped close. We screamed for no reason from the first floor, watching the pens that had fallen out bounce onto the ground.  Eva’s face was the physical definition of oh no, especially since it had been her bag passed through the window. It was safe, but half empty.  “I can’t find my ID!” Eva rummaged through it, and came up empty-handed. She took off back to class to check if she’d left her ID there. The rest of us peered down below, and watched a couple of boys walk briskly into the building. We hissed to get their a
Post a Comment
Read more

By Janaki - July 13, 2019
Let’s face it- concern about global warming was laughable until a few years ago. It was an obligatory subject in textbooks, and appeared occasionally in newspapers. The general assumption was humanity still had several years to implement measures before it was too late.  The time is ticking, and somehow, the needles have picked up pace. The consequences of our actions are now catching up with us, and taking their toll on other inhabitants of the Earth as well.  The most fascinating part of our thinking is the one that allows us to believe that we have authority over every other species on Earth. It is the one that will subsequently lead to our downfall, lest we start being more pragmatic than selfish.  It is unfortunate that millennials and Generation X will have to start taking global warming into account while thinking about building families. Overpopulation is a grave issue with far-reaching effects. Eventually, our descendents will face a despondent future alone- that
Post a Comment
Location: Riyadh Saudi Arabia
Read more

Vienna is popular for many reasons: it's been ranked as the world’s most liveable city several times, it’s home to the oldest zoo (Schönbrunn) and ferris wheel, plus it’s Austria’s capital. But what really got me enthused was that it’s also known for its cafes. Coffee in Vienna definitely lived up to its reputation, and it ticked another box from my invisible list.  The train station was five minutes on foot from Haus Wasserzeile. Our landlady had two adorable dogs, and I got to meet both, which made my stay all the more wonderful.  A specialty of Haus Wasserzeile was that residents had their breakfast together at a large table. Chatting with fellow guests, who also happened to be from outside Austria, made mornings more animated.  Vienna was more lively compared to Salzburg and Innsbruck, with restaurant hunting becoming a lot easier, and street performers adorning pathways. The four days we spent there went by quickly, and soon enough we were back in Riyadh.
Post a Comment
Location: Austria
Read more

After our Salzburg tour, it was time for our next journey, The dazzling photos I had seen online of the picturesque little city made me eager to visit Innsbruck. Snow capped mountains were prominent in every snap, and towered above. Our ride from Salzburg to our destination was heavenly. Views of meadows, farmhouses and towns outside the train windows made the time fly by. Soon enough, we were at our stop. From the Innsbruck railway station, we caught our bus. Like in Salzburg, our hotel here was also away from the city. What made it more interesting was that it was located 2000 metres above sea level. We were to get off at Kühtai, and the bus ride there gave us a glimpse of dreamy, serene Innsbruck. My feet were itching to get off and take in the riveting scenery myself, instead of how I had been doing for too long- through a computer screen. Bus travel between Kühtai and Innsbruck had a benefit-  guests had free access to the bus pass. The next morning, we
Post a Comment
Location: Kühtai 42, 6183 Kühtai, Austria
Read more 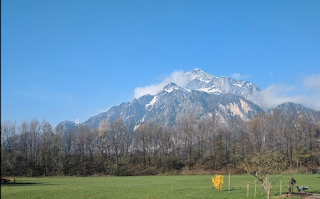 After a five hour train journey with a train change in Munich, we arrived in Salzburg. We had our eyes glued to the window through the entire bus ride, taking in the sights of the quaint city and the tall, rocky Alps. Mom was especially ecstatic about the the tiny shops selling a variety of things. Our lodging was a little far from the hubbub of Salzburg. We got off at our stop, and then it was a short walk to the Boutique-Hotel, Essigmanngut. The view that met our eyes was incredible. It was the kind of thing I had only gotten to see in movies; large green, rolling meadows framed by the ranges, old-fashioned houses with sloping roofs, and no one around for miles. It was a windy day, and the trees were swaying with sunlight filtering through their branches. We had never seen a place so serene. We did face one issue however- it was difficult to locate restaurants nearby. It took us a while before we finally identified a group of them, hidden away from the main street.
Post a Comment
Location: Salzburg, Austria
Read more

By Janaki - April 06, 2019
Phew! Class 12 exams are finally over, and I'm done with my schooling. The past few months have been nothing but hectic. Now, I can release that breath I've been holding. The day after the last exam, we arrived in Heidelberg, Germany. We had lunch at the Vietnamese restaurant we’re extremely fond of, but discovered that the previous chef had left, so the food wasn't as tasteful as it used to be. Later, Dad left to attend an SAP event where he was to receive an award, while Mom and I went for a walk and made sure to visit the bridge monkey. We aren't the superstitious type, but that doesn't mean we're ready to take a risk. It was a cold, windy day and we ended up shuffling back to our hotel after a while, thinking about going out later. Despite the weather, I bought a gelato because nothing was going to stop me from getting one. The rest of the day was rainy, which left us disappointed. We watched raindrops hit the wet cobblestones mournfully from our
Post a Comment
Location: Heidelberg, Germany
Read more
More posts