Showing posts from December, 2015
Show all

By Janaki Nair - December 26, 2015
It’s been a week into the winter vacation, and I have one more left. Dad makes it a point to wake me up every morning. Switching on the lights and creating all kinds of noise is the new way of making me roll off my bed and walk sleepily with my eyes closed. I still can’t believe 2015 is just a few days away from being over. I feel this year ended waaayyyy too quickly. There are so many things that happen at the beginning of every new year. It’s like tradition- I will write 2015 on my notebook next year, then realize what I did, and try to convert the 5 into a 6. Then when I start 10 th grade, I will write IX-B, realize what I did, and cross the extra line out. Then, I will tell everyone I study in ninth grade, catch myself, and say tenth. I watched “ Big Hero 6 ” a few days back. I had missed almost every opportunity I had to see it till then, so, I felt triumphant at the end. “Big Hero 6” is one of the many movies where it is absolutely embarrassing to te
Post a Comment
Read more

By Janaki Nair - December 16, 2015
This week has been a very busy one. On Sunday the juniors had their drill in advance for sports day, Monday and Tuesday were Sports Days, Wednesday (I stayed at home and slept till 11) was the talent show….. It’s been the most exciting week by far. And guess what? Starting this Sunday, we have two weeks of winter holidays. Holidays, in my opinion, is the best word in the English dictionary. (Well, second best. Food comes first. Exam comes last). Anyway, we had our march past yesterday. After winning the last year’s competition, I was hoping the same would happen this year as well, so I stepped in. There was a long queue of students trying out for the march past. But it was mostly the students who got selected last year that were selected this year. Mainly because no one could master the perfection of marching as we could (I discovered marching for a few days sticks for a long time. Even after the march past competition was over last year, I marched everywhere without r
Post a Comment
Read more

Looking for Nando's in Riyadh? 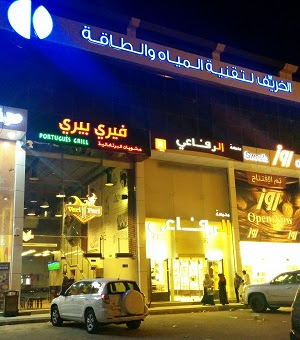 Update:  Great news! Nando's has finally come to Riyadh! It’s not Nando's, but it’s the next best thing- Veri Peri Portuguese Grill ! Dear readers, you know the passionate love for the restaurant ‘Nandos’ that my family and I hold ever since we tried it for the first time in London when I was six  years old.  After we reached Riyadh, Mom searched the Internet for Nandos. No luck. Nandos didn’t exist in Riyadh. But then BAM! 6 months back, Veri- Peri Portuguese Grill started itself about a mile away from our home. We tried it out for the first time today. Can I just say it was TAS-TY.  And it’s already popular. The restaurant was teeming with people when we got there. Just like the menu said, the chicken was juicy and had our favorite Peri-Peri sauce.  The chicken is soaked overnight with the sauce which is why it’s so delicious . If you are a Nando's lover living in Riyadh (hi-five), this is the place for YOU.
Post a Comment
Read more

By Janaki Nair - December 01, 2015
Finally, finally , my FA-3 exams got over. It felt like I’d been having them for a year. Last week was a rainy week. After the first two exams, everyone was texting each other of how there was a 99.9% chance of there being a holiday the next day. Our class Whatsapp groups were the most active. Where normal people would wish for the rain to stop, everyone in Riyadh was begging for a thunderstorm, some lightning, hailstones, or any other freakish weather phenomena, just to stay home from school. Some people had contacts with teachers as well, so they were kind enough to keep us updated. “Hey guys! Our math teacher just told me that we have a holiday tomorrow! Wheee!!!” “Really, are you sure?!!!” Then a screenshot of the conversation would be sent, and everyone would change their Whatsapp status to something regarding the blessing of the rain. An hour later, the principal’s message would reach our phones, and that would be circulated around the Internet. This
Post a Comment
Read more
More posts